Western countries cling on to censorship to save ‘democracy’

December 18, 2016 12:00 am Published by Tomasz Pierscionek Leave your thoughts Some Western leaders, alongside their media allies, take a peculiar approach toward free speech and democracy, one seemingly predicated on how these reconcile with their own foreign policy objectives and who is affected – friend or foe. We see how the US and its allies avoid criticising the Saudi regime’s lack of democracy and free speech, alongside what is arguably the worst human rights record of any nation in the 21st century. Saudi Arabia’s leaders also escape judgement for their role in permitting the spread of the reactionary Wahhabi/Salafist doctrine that forms the bedrock of Jihadi terror.

Other nations whose human rights records appear saintly in comparison, are singled out for criticism, destabilisation and, if all else fails, ‘humanitarian intervention’. A similar irony is seen when progressive and liberal Western democracies take a side step in an illiberal and regressive direction, if their own interests are perceived as being under threat.

Last month, MEPs voted to endorse a non-legislative resolution to counteract “propaganda from countries, such as Russia, and non-state actors, like Daesh, Al-Qaeda and other violent jihadi terrorist groups”, citing the Russia Today television network and the Sputnik website as part of a “wide range of tools and instruments” Russia is using “to challenge democratic values, divide Europe, gather domestic support and create the perception of failed states in the EU’s eastern neighbourhood”.

The resolution follows a May 2016 report by Anna Fotyga, Polish MEP and member of the European Conservatives and Reformists (ECR) group in the European Parliament. The report, EU strategic communications with a view to counteracting propaganda, seeks ways to suppress ideas and opinions which do not fit with the idea that West is best.

Although the resolution was carried, a majority of MEPs were not convinced of the dangerousness of Russian propaganda. 304 voted in favour of the resolution but the majority either voted against it (179) or abstained (208). Some MEPs found the whole process a laughing matter. Javier Couso Permuy, MEP from Spain’s left wing coalition Izquierda Unida commented: “This report is insane. It fosters hysteria against Russia and neo-McCarthyism in Europe. It’s a caricature of Russia,“

A new Iron Curtain?
The concept that Russia is annexing the innocent minds of European citizens, to destabilise our natural way of thinking, suggests we lack robustness to alternate views and opinions and are unable to make up our own minds about what we hear and see. Such rhetoric is reminiscent of the Cold War. This time however, we have a new (media) Iron Curtain to keep out degenerate Eastern influences that threaten to ‘subvert’ Western culture.

News outlets like Russia Today, whether or not you agree with the content and ideas espoused, promote diversity of thought and provide a different perspective on world events that is urgently needed to broaden opinions, balance perspectives, and sometimes blow gaping holes in narratives promoted by Western politicians and media. Such is the danger of free speech: sometimes it just does not go your way. So, is Russian ‘propaganda’ just too good or is EU/US propaganda not up to scratch to ‘protect’ us from different ideas? Could it be that the West is simply running out of propaganda, along with those willing to adhere to the oft repeated and worn out hype.

The USSR started to collapse when it could no longer offer its citizens a decent standard of living. No amount of anti-Western propaganda could fill stomachs with food, light a hearth, or fix a leaky roof. In a similar way, Europeans are more concerned with falling living standards brought about by austerity and have less time to think about, let alone support, the disastrous global ambitions of the powerful and wealthy. Although providing a very temporary distraction from our domestic problems, no amount of blaming Russia for everything from Brexit to Trump will fix these problems. (Arguably, further military spending and foreign adventures will make European citizens’ standards of living fall further and faster).

Blaming Russia is not only a pathetic way of deflecting from the EU’s own domestic problems, but also causes us to miss out on the many great opportunities (economic, cultural, political) that could exist if we had friendly relations with Russia. Such cooperation is unpalatable for the US, who would feel threatened by the combined economic, military, and cultural might of a combined EU-Russia bloc. Attacking media outlets that challenge the status quo will only lead to more people watching them – as happened in the last years of the Eastern Bloc.

Tired of a crumbling economy, sick of the incompetence of their leaders (sound familiar?) and annoyed at being told to steer clear of Western influences, the peoples behind the Iron Curtain started watching and listening to Western television and radio channels in increasing numbers. Potential punishments did not even prove a sufficient deterrent. Similarly, clamping down on media such as Russia Today and Sputnik will only make them even more appealing.

‘Freedom‘ and ‘democracy’ courtesy of the West
Speaking of free speech and democracy, let us take a look at a nation that has (with Western assistance, of course) lost both in recent years. Following the 2014 coup in Ukraine, with EU and US politicians doing far more than operating alternative news channels, the country descended into chaos. Far right paramilitaries, some containing openly neo-Nazi elements, have been used in the subsequent civil conflict or reportedly incorporated into the state apparatus, such as the police force and military. Whereas the populations of two Eastern regions of Ukraine, the Donetsk and Lugansk People’s Republics, continue to steadfastly resist ongoing artillery shelling and incursions by the Kiev regime, civilians in the rest of Ukraine live in fear of arbitrary arrest and torture by their government’s security apparatus. Some have simply disappeared or been murdered by unknown assailants. In addition to the infamous murder of at least 48 trade unionists and other opponents of the Poroshenko regime, who died after the Trade Union building in Odessa was set alight by a nationalist mob on the 2nd May 2014, many more human rights violations have occurred since.

For example, journalist and writer Oles Buzina, a critic of the Poroshenko regime and a campaigner against fascism in Ukraine, was murdered near his home in Kiev by unknown assailants. The killing took place only a day after Oleg Kalashnikov, a former MP from ex-President Victor Yanukovich’s party, was found shot dead. Several supporters of the former President have also died in mysterious circumstances, ostensibly reported as suicides.

In April 2016, Russian citizen and activist Andrei Sokolov disappeared after being kidnapped by unknown assailants upon leaving a courtroom in Ukraine. He was subsequently held for several months in a secret prison. Alla Alexandrovskaya, a former MP and head of the Kharkov branch of the Communist Party of Ukraine, was arrested and detained without trial for months. She has been released but reportedly remains under house arrest. Journalist and blogger Ruslan Kotsaba, a supporter of the Maidan movement that led to the overthrow of the elected Yanukovich government, was arrested in February 2015 for treason after producing a Youtube video in which he refused to be conscripted into the army to take part in a civil war against fellow Ukrainians who do not wish to be governed by the Poroshenko regime. He was released from prison in July 2016 after serving 18 months in detention.

The far right paramilitary formations which exist in today’s Ukraine were used to spearhead the overthrow of an elected, though corrupt, president in 2014. They have since been unleashed against their (former) fellow countrymen and women, who wanted no part in the new nationalistic and xenophobic Ukraine that exploded onto the world stage in February 2014. During the Second World War, under the leadership of Nazi collaborator Stepan Bandera, the Ukrainian Insurgent Army (also known as the UPA) murdered thousands of Jewish and non Jewish Poles and Russians. In the single region of Volyn, the UPA slaughtered an estimated 40,000 Poles in order to ethnically cleanse the region of non-Ukrainians in preparation for a future Ukrainian state, as per the 1943 decision of the UPA’s politician wing, the OUN (Organisation of Ukrainian Nationalists).

In July 1941, OUN militants participated in the Lviv Pogrom, alongside the invading German troops, in which thousands of Jews were killed . After the 2014 coup, modern day sympathisers of Bandera went about the task of trying to purify Ukraine of ethnic Russians and ‘traitors’. The paramilitary organisations that played a role in the invasion of the seceding Donetsk and Lugansk regions make no secret of their ideological inspiration.

Back in November 2014, Ukraine was one of only three countries, alongside the US and Canada, which voted against a resolution passed at the UN General Assembly “Combating glorification of Nazism, neo-nazism and other practices that contribute to fuelling contemporary forms of racism, racial discrimination, xenophobia and related intolerance”. 115 nations voted in favour of the resolution with 55 abstaining. A similar resolution, condemning the glorification of Nazism, was approved by the UN in November 2016. This time 131 nations voted in favour, 48 abstained and three (the US, Ukraine and Palau) voted against. (As noted by the Jerusalem Post, many of the abstentions included EU nations).

Few Westerners may be aware of Bandera’s background but undoubtedly fewer know that there is actually a Stepan Bandera museum in London: the ‘Stepan Bandera Museum of the Liberation Struggle in London’ is mentioned on the website of the “Association of Ukrainians in Great Britain.

Becoming the very thing you despise
Whilst venerating Bandera, some patriotic Ukrainians screech about the crimes of the USSR. Yet, in some ways, they have bought back into existence the very thing they claim to despise. In post-coup Ukraine, billboards have appeared calling on citizens to report those deemed “separatists”, which can allegedly mean anything from not showing enough patriotic fervour to criticism of the civil war. Offenders face lengthy prison sentences, or worse. Encouraging the denunciation of your fellow citizens for thought crimes is about as Stalinist as it gets. Some examples of these billboards (with translations and links) are provided here: 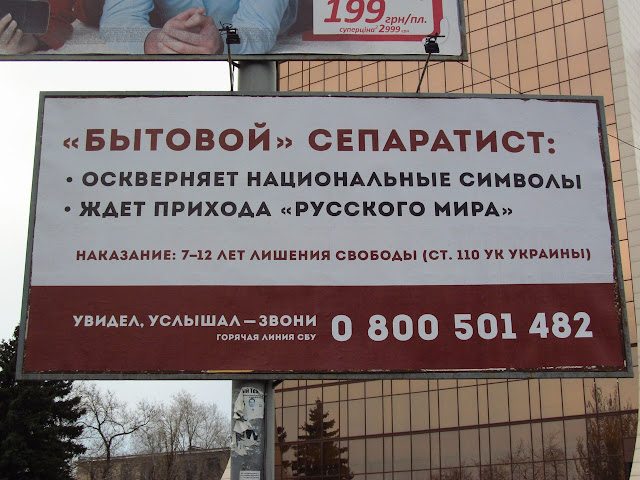 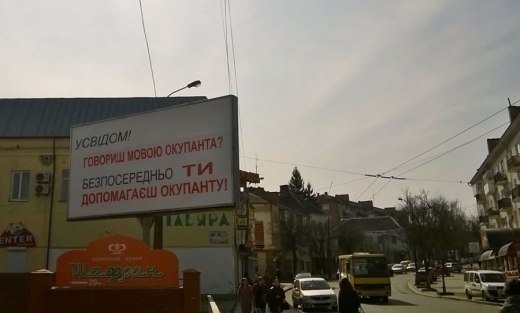 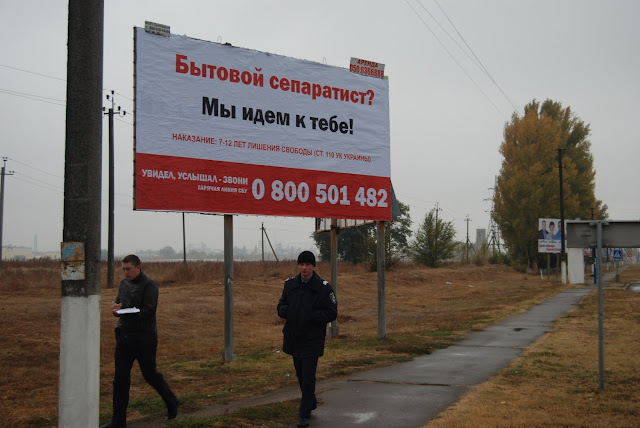 How to identify a separatist? [From bottom left clockwise]
• Talks about how life was better in the past [in the USSR] • Wears a St George’s ribbon [symbol of Russia’s victory in WWII] • Believes the Russian media • Believes that power in Ukraine was seized by fascists • Blames America for everything • Uses the following vocabulary: <<Junta • Shouts that Ukrainian gangs created a war in the Donbass 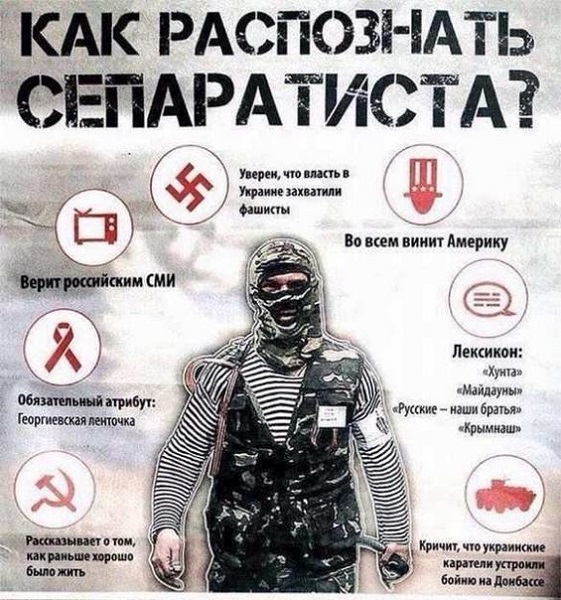 This article was first published at Fort Russ
http://www.fort-russ.com/2016/12/western-countries-cling-on-to.html